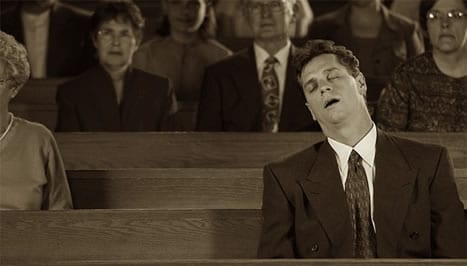 Self-indulgence marks the culture in general.

Contemporary church movement the idea of church has become a kind of a spectator experience, you go to watch what happens. We are in a most narcissistic, self-absorbed, self centered society that America has every known and becoming increasingly more so.

People are basically disinterested in anything that doesn’t accrue to their own benefit. Churches have decided, have accommodate to that and so churches have become locations where certain forms of religious entertainment are displayed for people who many cases sit in a dark room and watch the event take places.

Churches are staffed very largely by paid professionals financed by the spectators. Very little and sometimes nothing is asked of those people except occasionally to give some money so that stye can continue on the production.

This is the kind of culture that we have. We have, on the one had, a sort of couch potato culture, and on the other hand, a fitness culture. In both cases, the idea is to give away your life to satisfy yourself, rather than someone else.

The Kingdom of God is not a Spectator Sports.

We don’t need someone scolding the ineffectiveness of the church today as much as a leader to show a fresh, effective way to tell the timeless good news.

Discipleship has been a hot topic in Christian circles. When I converse and speak on this topic I often hear almost a debate or even an argument of “the right way.” You can find blogpost all over that speaks of the right way of discipling of different methods to take. Rather than arguing the semantics debate over discipleship, strong arguments on how to approach it, I think we should just simply do it and begin to live in a different light!

At the end of the day, something has to change and we’ve argued too long and seen thousands of people just gone pass by our eyes.

Don’t think about how I’m going to approach it, how I am going to share it, the question you ought to ask is, “Do I know my neighbors name?” Practically, we have trained our churches as an institutionalized mentality and we live practically as atheist as we don’t even know our neighbors name! No wonder we don’t see result and we don’t see people reaching out to the lost. In a gospel conversation the witness seeks to do more than get an unbeliever’s attention enough to present the gospel to them. It seeks to do more than share the gospel as briefly as possible with people hardly know!

The shift from monologic evangelistic presentation (I talk, you listen) to dialogical conversations(we talk together and listen to one another) has been crucial change in our culture today. You can have real and effective conversations through the relational environment through discipleship with people about Jesus

Contemporary churches today offer fitness classes, but they’re not in the mission department. And ultimately, the church does not simply have a missions department; it should wholly exist to be a mission. For when the Church ceases to live as missional living, it contradicts its own nature. It has died as a church.

How are we to overcome the fear? Goes back to the first step, to understand and truly know the gospel. As J.D. Greear said it, “The Gospel will move people from FEAR to LOVE.” Because we now have the love of God within our hearts, we are able to love the lost that will lead us to live a missional living rather than a spectator lifestyle.

Churches have become preoccupied with existing to meet people’s felt needs and satisfy their wants. They are no longer fellowship of those who are sacrificial, those who want to give their lives away.

So which one are you? There’s only two categories. Spurgeon said it well, “Every Christian is either an imposter or a missionary.”