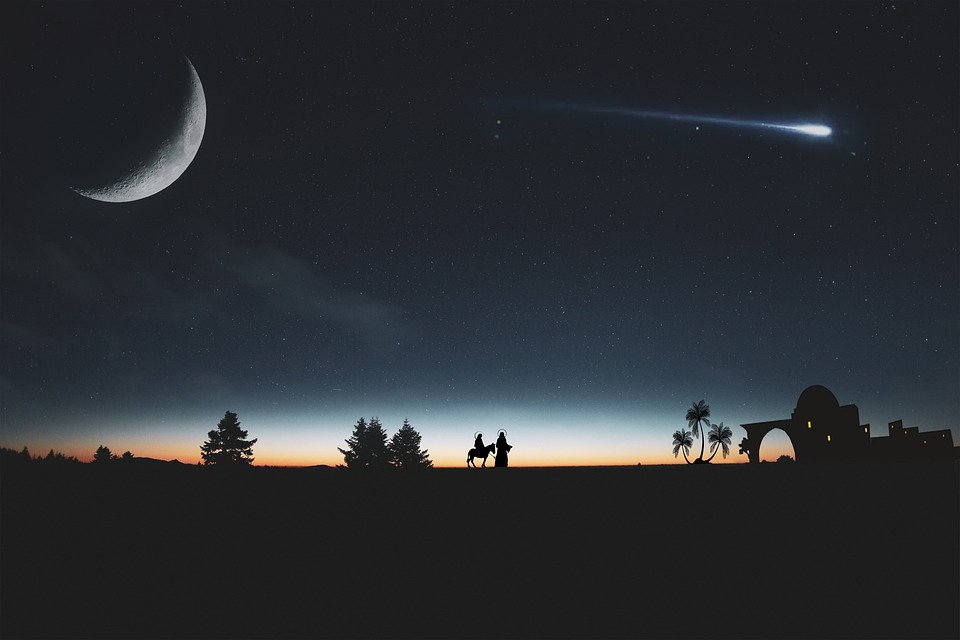 “It’s beginning to look a lot like Christmas! Everywhere you go” is one of my favorite songs that reminds me of “Tis the Season!”

Christmas reminds us of the vast reality of the desperate urgent need of Jesus in a world ruined by sin.

Christmas reminds us of how His glory has been revealed! He is glorified in His creation. “From him and through him and for him are all things. To him be the glory forever! Amen” (Rom 11:36).

Jesus said, “I am the light of the world. Whoever follows me will never walk in darkness but will have the light of life.” (John 8:12). He came as a mild babe in the manger (Incarnation).

The Very Beginning of Christmas

We need only read the first verse of the Bible (Gen. 1:1) to understand the central issue of life, and it centers on reality.

“In the beginning” (v. 1). This phrase represents the first Hebrew word in verse 1 and serves as the title for the book in the Hebrew Bible.

He is the Creator! This means the one who alone exists, and everything else is only the work of His will and Word. Theologians called this “Creatio ex nihilo” in Latin means “from or out of nothing creation” Which means, God as Sovereign knows and controls the “end from the beginning” (Isa 46:10).

the Infinite One condescends by announcing his presence. Christmas reminds us that God is not merely an idea. He is an Eternal Being whom we can know and experience personally.

The full manifestation of the Unknown One awaited the Incarnate Word, who as Son is the “exact representation of his being” (Heb 1:3).

John 1:1 reminds us of this glorious truth, “In the beginning was the Word.” John wants his readers to understand that at whatever point the creation began, the Word already existed. Like his heavenly Father, Jesus reveals eternality, personality, and deity.

As the old Christmas hymn written by Charles Wesley painted so well, the God of creation, the ultimate mind of the universe, had taken on human form; he had become incarnate.

Veiled in flesh the Godhead see;

Pleased as man with men to dwell,

Therefore, before the world was created, the Word already existed

In 325 A.D. The first ecumenical council was held in Nicaea called, “The Council of Nicaea” to resolve the controversy of Arianism, which was a doctrine that held that Christ was not divine but was a created being.

Therefore, Jesus was NEVER created. To deny the Trinity means you are not a Christian.

Christmas Reminds Humanity in Need of a Savior

I am reminded more than anything the lie of “self-sufficiency” elevates the self to the throne of God by saying, “I don’t need God. I am excessively sufficient within myself, and I need no help from anyone” during Christmas season.

Sin is this; sin causes each of us to place ourselves in the center of our worlds and make life all about us.

Our problem is not just that we live in a broken world and that brokenness enters our doors; beneath that reality is a much deeper problem. We have a problem with glory.

As John Piper will say this way, “As the image of God, a man was created to reflect, express, and participate in the glory of God, in miniature, creaturely form.”

Sin ultimately pulls us away from God and produces in us an obsessive allegiance to what we want. The ultimate problem = SELF: I, me, myself is the problem!

We have an issue with a holy God. We are by nature totally depraved. Why? It is because of Adam’s sin; people are born in a “depraved” state.

In the end, we try to hide from God (Gen 3:8). You see, sin by nature separates. Sin is and always has been ANTI-RELATIONAL (Gen 3). Sin doesn’t come in different degrees: It is like cancer and eats you up.

Jesus a Friend of Sinners and Suffers Has Come!

However, the glorious, good news of Christmas enters. A savior was born in the town of Bethlehem!

“For one man entered sin. Death spread to all men” (Rom.5:12). Jesus with one act of righteousness does undo what Adam wasn’t able to do. Jesus was faithful where Adam couldn’t. Jesus was able to do what the children of Israel couldn’t.

God promised that a man would “bruise” the enemy’s head (Gen 3:15). God has made a way out of our brokenness: the gospel.

The sinner is dead, blind, and deaf to the things of God; his heart is deceitful and desperately corrupt.

“Who, though he was in the form of God, did not count equality with God a thing to be grasped, but emptied himself, by taking the form of a servant, being born in the likeness of men. And being found in human form, he humbled himself by becoming obedient to the point of death, even death on a cross.” (Phil 2:6-8).

This is where we are confronted and comforted by the glorious goodness of God and the radical humility of Jesus. Jesus left his lofty place to rescue glory thieves.

Jesus comes to you, a wretched, pitiable, poor, blind naked you. As John Flavel, a Puritan preacher puts it, “God did not choose you because you were high, he will not now forsake you because you are low.”

This is the incarnation. Christ who is nothing, but pure grace clothed within his nature came for us. Despite all your messiness, despite dark miseries, His loveliness swallows it all up and remembers no more.

God has “freely given” which in the Greek form (charizomai) of the common Greek word for “grace” (charis), which he has GRACED YOU. By God sending his only begotten Son Jesus Christ, he has saved us from all consequences and in. Salvation is then deliverance, preservation, from any danger.

Christmas is the story from the Crib to the Cross pointing to the Crown.