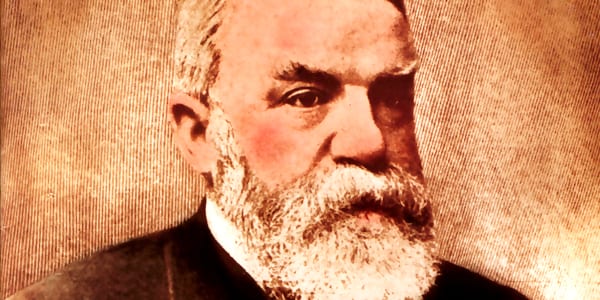 “Jesus looked at them and said, ‘With man this is impossible, but with God all things are possible.'” Matthew 19:26

Dwight L. Moody was a poorly educated, unordained, shoe salesman who felt God’s call to preach the gospel. Early one morning he and some friends gathered in a hay-field for a season of prayer, confession, and consecration. His friend Henry Varley said, “The world has yet to see what God can do with and for and through and in a man who is fully and wholly consecrated to Him.” Moody was deeply moved by these words. He later went to a meeting where Charles Spurgeon was speaking. In that meeting Moody recalled the words spoken by his friend, “The world has yet to see … with and for and through and in … a man!” Varley meant any man! Varley didn’t say he had to be educated, or brilliant, or anything else. Just a man! Well, by the Holy Spirit in him, he’d be one of those men. Then suddenly, in that high gallery, he saw something he’d never realized before.

It was not Mr. Spurgeon, after all, who was doing that work; it was God. And if God could use Mr. Spurgeon, why should He not use the rest of us, and why should we not all just lay ourselves at the Master’s feet and say to Him, “Send me! Use me!”? D. L. Moody was an ordinary man who sought to be fully and wholly committed to Christ. God did extraordinary things through this ordinary man. Moody became one of the great evangelists of modern times. He founded a Bible college, Moody Bible Institute in Chicago, which sends out men and women trained in service for God.

Dwight Moody was born in Massachusetts, to a large family. His father, was a small farmer and stonemason, died at the age of 41, when Dwight was only four years old. They had five sons and a daughter before Moody was born, with twins, born one month after hid father’s death. His mother struggled to support the family. Dwight’s formal education ended in the fifth grade, and he rapidly tired of life on the farm. Even during that time she continued to send them to church. His oldest brother ran away and was not heard from by the family until many years later. When Moody turned 17, he moved to Boston to work (after many job rejections) in an uncle’s shoe store.

What set this school apart was Moody’s desire to reach the “lost” youth of the city, the children with little to no education, less than ideal family situations, and poor economic circumstances. Soon the Sunday school outgrew the converted saloon used as a meeting hall. As the classes grew, associates encouraged Moody to begin his own church.

“The first meeting I ever saw him at was in a little old shanty that had been abandoned by a saloon-keeper. Mr. Moody had got the place to hold the meetings in at night. I went there a little late; and the first thing I saw was a man standing up with a few tallow candles around him, holding a negro boy, and trying to read to him the story of the Prodigal Son and a great many words he could not read out, and had to skip. I thought, ‘If the Lord can ever use such an instrument as that for His honor and glory, it will astonish me. As a result of his tireless labor, within a year the average attendance at his school was 650, while 60 volunteers from various churches served as teachers. It became so well-known that the just-elected President Lincoln visited and spoke at a Sunday School meeting on November 25, 1860.”

The growing Sunday School congregation needed a permanent home, so Moody started a church in Chicago, he began to do summer evangelistic campaign and spoke all over. During a trip to United Kingdom in the spring of 1872, he became 3well-known as an evangelist. Literary works published by the Moody Bible Institute have claimed that he was the greatest evangelist of the 19th century. On several occasions he filled stadia of a capacity of 2,000 to 4,000. In the Botanic Gardens Palace a meeting had an audience between 15,000 and 30,000. The famous London Baptist preacher, C.H. Spurgeon, invited him to speak, and he promoted him as well. When he returned to the US, crowds of 12,000 to 20,000 were as common as they had been in England.

2. The Lesson from Dweight L. Moody

Who would have thought about a guy who stacks up size 9 and size 10 shoe store guy become the greatest evangelist the world has ever known?

An extremely average man without much talent or potential left a great mark in history. Who only had a formal education ended in the fifth grade who couldn’t spell, and his grammar was awful. By the time he was saved, (1856 age 18 years old) his manners were often brash and crude, and he never became an ordained minister. By the end of his life spoke to over 100 million people with the evangelical campaign throughout all the world. Eventually became the founder of the The Moody Church, Northfield School and Mount Hermon School in Massachusetts (now Northfield Mount Hermon School), the Moody Bible Institute (Moody Theological Seminary), and also Moody Publisher.

He only not had a heart for the crowd/mass evangelistic campaign, but Moody often went into little hell where none dared to step in.

“When D.L. Moody arrived in Chicago… he was warned to stay away from an area of town known as ‘Little Hell.’ Few Chicagoans ventured into this area characterized by gambling, fighting, prostitution, and drug addiction. Even the police had little presence there. Dr. Lyle Dorsett, in his extraordinary biography on the life of D.L. Moody A passion for Souls reiterates, ‘Moody was one of the few who had the audacity and courage to go into the worst district of Chicago, the Sands. ‘Sometimes called ‘Little Hell,’ this is where Moody went to rescue souls.”

3. The Vision of Dwight L. Moody

“If this world is going to be reached, I am convinced that it must be done by men and women of average talent.” – D.L.Moody

Moody’s vision that was within his own heart was this; to take men and women who have the gifts and trying them to the work of reaching the people. Moody believed with the very core of his being that we are the people reaching and to as the gap-man, me nada women who stand between the laity and the ministers. Train up those who will stand between the gap.

Moody said these words as he departed this earth finishing well the race;

Someday you will read in the papers that D.L.Moody of East Northfield is dead. Don’t you believe a word of it! At the moment I shall be more alive than I am now, I shall shave gone up higher, that is all out of this old clay tenement into a house that is immortal; a body that death cannot touch, that sin cannot taint; a body fashioned like unto His glorious body.

He indeed did left a bold legacy before us. Now it’s our turn. What are you doing today to impact those before you? Are we going to live this day with the promises we have with the bold legacy that is laid before us?

0 thoughts on “A Passion For Souls: Life of D.L.Moody”